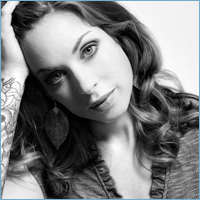 Author and performer Jillian Lauren grew up in suburban New Jersey and fled across the water to New York City. She attended New York University for three minutes before dropping out to work in downtown theater, where she performed with Richard Foreman’s Ontological Hysteric Theater, among others.

She is the author of the novel, PRETTY, and of the New York Times bestselling memoir, SOME GIRLS: My Life in a Harem, both published by Plume/Penguin. SOME GIRLS has since been translated into fourteen different languages.

Jillian has an MFA in Creative Writing from Antioch University. Her writing has appeared in The Paris Review, The New York Times, Vanity Fair, Los Angeles Magazine, Flaunt Magazine, Opium Magazine, Society, Pale House: A Collective and in the anthologies My First Time: A Collection of First Punk Show Stories and Tarnished: True Tales of Innocence Lost.

Some Girls: My Life in a Harem, Jillian Lauren, (Plume)